Showcasing illustrations and art which tells a story 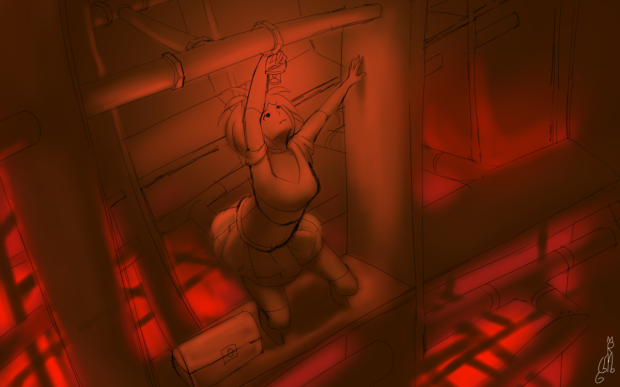 The story idea that first came to me when drawing this was a business/legal comedy that centered around the “safe business practices” law that had just been passed in the story’s setting, a steampunk-industrial sort of america.  When I pitched the idea to my mom, she didn’t really think that it would be all that funny and by the end of our conversation, neither did I. o )- o Though, I still want it to be funny because this character’s hair is kind of rediculous and it just evokes “funny” to me.  Plus, she seems to be maintaining this factory completely solo which is even more rediculous.  Even if the orange-brown-red scenery is kind of sinister…

The other option is some sort of kidnapping because my big sis pointed out that it sort of looks like she’s chained to that pipe.  That was completely unintentional, but I see where she’s coming from.  I don’t know whether I should be bothered by that or not, because on the one hand I was really constrained and it was the best I could do to keep her hand from looking broken, but on the other hand I don’t want this character to look like the victim of a kidnapping when really she’s just inspecting the pipes.

I’d like to hear your interpretations, too!  Ideas all around!  Fun times!

© Clara Rininger and C.M.Rininger, 2019. Please remember that I spend hours pouring my heart and soul into this stuff. Respect that, and don't just take my work. Thanks.

Hi, my name is Clara, and I like to write and draw. I do these things because I have been richly blessed, with the hope that I may pass that blessing on to you. Thank you for stopping by.